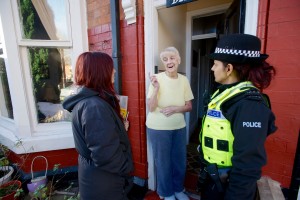 Birmingham police have led a blitz on hotspots to make locals feel safer.
Officers teamed up with councillors, housing officials and council waste staff to clean up areas of Lozells and East Handsworth’s Leonard Road, Carpenters Road and Wills Street following complaints that graffiti and piles of rubbish were affecting local businesses and bringing the area down.

Over 100 properties were visited as part of the day of action with officers outlining their ongoing work to tackle a seasonal rise in crime and urging homeowners and shopkeepers to play their part by bolstering security and reporting suspicious characters to police.

Sergeant Kin Devi organised the clean-up. She said: “The action day was extremely well received and we listened to what local people felt our policing priorities over the coming weeks should be.

“As part of the day we held a safety session at Lozells Methodist Church for women. Due to its success we plan to hold a similar talk to in the coming weeks.”

Between April and December 2013 1,559 crimes were investigated by officers in the whole of Lozells and East Handsworth compared to 1,515 over the same period the year before. This equates to a rise of 44 offences.

The clean up day took place on Monday 27 January.

For live updates on the work of police in Lozells and East Handsworth @LEH_Police on Twitter.